Hello faithful readers, and for that I thank you, today I decided to start something new. Memory Monday. I was trying to fall asleep last night and out of the blue, I just thought of this! So like Tubesday, which hardly ever happens because I forget about it, Monday will be a special day where I post a memory I have from my past or whatever. I don't want to forget them, and maybe they'll be interesting for you to read too, I don't know. I'll try to be less forgetful about Memory Monday and Tubesday, but knowing me, I'll probably forget anyway xD
I will post the answers for the "How Does Your Imagination Imagine Me" thing hopefully Wednesday, but I have exam this week so things might get a bit delayed since exams prioritize before blogging :(
Now for the memory!

When I was four years old, or in preschool, which would be exactly 10 years ago, we were sitting at tables doing alphabet crafts where you would cute out letters from magazines and sort the letters out in alphabetical order or whatever. Then we would glue the letters on a piece of paper, one paper for "A", another for "B", and so on. A boy wandered over who I had never noticed before. I played with the other kids, but I didn't really have any close friends in preschool. Anyway, so this kid, Wesley, came over and gave me a bracelet that his mom made and I was so shocked, I didn't even know why he gave me the bracelet, I had never talked to him before! When the teachers told me to say thank you, I wouldn't because I was embarrassed about it, and wouldn't thank Wesley. 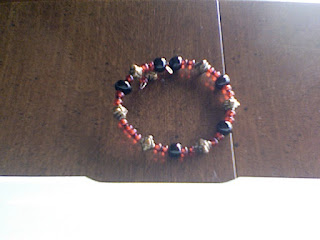 The whole class went to sit on the rug, but they made me and Wes sit there until I said thanks. I just felt like I couldn't say thanks! I was embarrassed!
Finally, I mustered up the courage to thank him briefly and went over to sit down with the rest of the kids. Of course, he just had to sit next to me!
We became best friends, and by best friends, we were always together, or joint at the hip as some might say. I wore the bracelet everyday of preschool and on the day of preschool graduation, his mom told my mom that they were moving. Out of state. To Wisconsin. I didn't really understand that I would never see him again, so I didn't even get an address or phone number, nothing. What preschool mind thinks of that anyway?
I still have the bracelet, actually, it still fits too! That's what the picture's of and I can only hope that I'll meet Wesley again someday. I've searched him on Facebook and Twitter with no results and then I looked at his letter he wrote me and noticed that his name was R. Wesley Applewood.  I don't even know his first name! I can only dream.
~Julyabelle
Email Post
Labels: memory monday