WARNING! THIS POST CONTAINS THE RAMBLINGS OF A FANGIRL..... My Ed Sheeran Experience

Welcome! As I said, this post is going to be filled with fangirling. This post is basically just rambling on about how good he is but hey, I'm a fangirl. So watch out ;)
I wrote this for English class about my Ed experience: 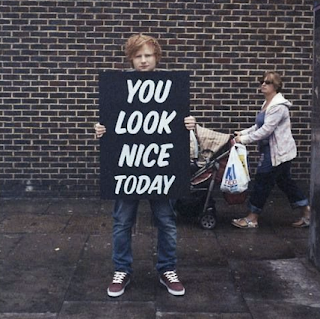 The whole place exploded into a piercing chorus of screams. Ed Sheeran was walking over from the dugout to the moderate sized stage located on second base.

On this video (below) if you don't wanna watch the whole thing, go to 4:30 and that is an example of how he made his own music. There is no track being played in the background, he is creating everything with a loop pedal. Oh and this is not my video and I have no idea who filmed it. All I know is I WAS AT THAT CONCERT AND JUST WATCHING THIS MAKES ME WANT TO SOB! Watch the whole thing.... If you're a fan, you'll get goosebumps like I always do.
Actually you can stop at 7:26 because at that point he said a bad word and had everyone else chanting it, plus there isn't really much else to the video. I was super mad at him for that but other than that, his performance was clean. I'm really sorry that I have to share this video with the swear word, but it's my favorite performance of the night and I couldn't find any other videos of it :(

This was a great performance too :) The video (below) is uploaded by the same person I think but as I said before it wasn't my filming. Wish it was cause she had an insanely good spot..... I didn't have floor seats because they costed $40 (or 29.652 Euros) and I didn't wanna pay that much when I could have seats that were just fine for a ton cheaper. And as I said, I was a little jealous, but they had to stand in the sun braving over 100 degree weather for over four hours. But AHHHH THAT FALSETTO! And I tell you: I had no voice. Ed achieved his goal. CRYING right now.

These videos are of the very first and last performance of the night..... the memories! *sniff, sniff* *grabs a Kleenex to dab away the stray tears that managed to escape out of the eyes while watching these videos*

If you like what you see, look up Small Bump on iTunes and buy it. Makes me sob every stinkin' time. Just wait till the end of that song. Also watch his music video for "Lego House" because the actor for Ron Weasley is the main person in it :) But watch for Ed at the end!
I couldn't find the one where there is a Lego animation right next to it which is super cool, but oh well.


Alright, well sorry that you had to go through reading my fangirling.... When I fall, I fall hard haha.

My final thought to leave you with is that I felt so honored and surprised that such an amazing British musician who doesn't come to the USA often chose to come to a small concert in a somewhat small (small as in not as big as Detroit) city when he could have spent his night somewhere else doing the things he loved on such a bigger sized stage. Like literally there weren't that many people there, 1500- 2000 when Soldier Field's capacity is 61,500 and it was sold out.

Ed, if you ever google yourself and land on this blog post written with love from a teenage girl, I just want to say thank you. Thank you for an amazing night that I will never forget.
Mischeif Managed!
Love, July