Book review: The Sky Is Everywhere

Hey bloggers! So I know I haven't been posting much but I have been reading this summer. Don't worry, I haven't forgotten my roots :)
So anyway I'm gonna review a book that left mixed impressions with me because of it's content.
Title: The Sky is Everywhere
Author: Jandy Nelson 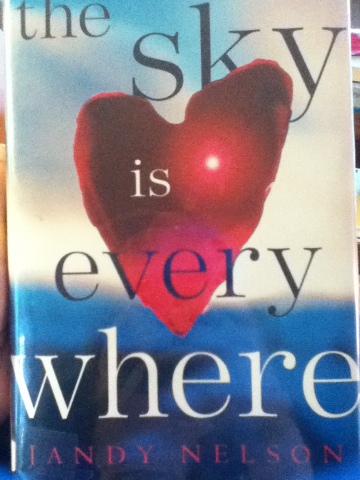 Genre: realistic fiction and romance?
Synopsis: Seventeen year old Lennie Walker, bookworm and band geek, plays second clarinet and spends her time tucked safely and happily in the shadow of her fiery older sister Bailey. But when Bailey dies abruptly, Lennie is catapulted to center she of her own life-- and despite her nonexistent history with boys, suddenly finds herself struggling to balance two. Toby was Bailey's boyfriend; his grief mirrors Lennie's own. Joe is the new boy in town, a transplant from Paris whose nearly magical grin is matched only by his musical talent. For Lennie, they're the sun and moon; one boy takes her out of her sorrow, and the other comforts her in it. But just like their celestial counterparts, they can't collide without the whole world exploding. (Taken from the book jacket, like always)
Good stuff: The plot was amazing, the way the author weaved these lives together and kept coming with insane plot twists was very satisfying to the reader!
Personally, I was bawling by the end of this book. I had the whole thing read in less than a day and couldn't put it down!
The author portrayed the grief and thoughts that a young sister might be having very well and I could relate to Lennie easily. It was a deep book that I just can't stop thinking about!
Bad stuff: I'll start with this- It was a little predictable in some ways (but in other parts i had no clue what was coming!!) just like many love triangles, but that didn't bother me near as much to what is coming!! There was a bit of drinking wine (which is normal in Europe but a minor was drinking in America which is against the law!) and vodka, smoking weed, and just smoking. Some parts were a bit scandalous...... That was my main problem with it and why I'm torn with what rating to give this book!
If you don't want to read this next paragraph, don't, but I'm going to be honest about what was such a scandal. I you choose not to read it, skip to the next part which is the rating :)
There was some talk about sex, and it was almost done between Lennie and her sister's boyfriend. Talk about boobs an guys touching her boobs, which I'm saying very bluntly but in the book they just said, "His hands down my shirt" so they leave the reader to figure it out by themselves. Lots of making out. Also at one point Lennon an her friend Sarah are swimming together naked.
Rating: 3.5 clarinets out of 5- I would love to give this a better rating but I can't cause of the inappropriate parts :/
Recommended Readers: Mature 13 year olds to maybe 18 year olds. Hard to say, but it's good for my age group I think!
Alright so on a different note, we'll be getting her tomorrow!! Her as in our foster dog!!! So we need a name. Tell me which of these you like best!
Lillie
Bengal
Roxy
Nevaeh
Nyx
Echo
Jade
Loki
Comet
Baya
I love you guys :)
Julyabelle
Email Post
Labels: Book review foster dog