This past weekend was banquet. On Friday night actually :) If you remember, I've been posting possible (but not really) dresses every once and I while that I think would be adorable. Well, I finally got my own dress! For two whole months it had been sitting in my closet just waiting for me to wear on May 31 at banquet. Someone from another high school did my hair, which was a fancy up-do that was braided into a bun type of thing. I don't really know what to call it!

This is what happened: First at 5:00 we all met at a park to have pictures (too many pictures if you ask me), then we headed over to my school at 5:30 for punch. We didn't start eating until 6:00 and the food was great! After that we went to the church across the street for the program which consists of academic awards, fun awards, graduation (sorta), and the worship team is performing/leading worship.

So when we got there the first thing was worship team which I'm in and it was super fun because we did some of my favorite songs we did this year including Called Me Higher by All Our Sons and Daughters.
Then there were a couple of slide shows featuring all of us as younger kids and then our yearbook pictures from this year which was actually pretty funny :P There were fun awards which everybody got and I got some big words that I don't remember (actually one of them was honest I think.... not sure though :P)
Then we had the academic awards which only a few people got but I was actually one of them which was surprising! I ended up with the choir award and a $50 check attached ;) Not arguing there!
After that we received our Bibles and shook lots of people's hands, blah, blah, blah! The cool things about the Bible's is that our names are engraved in them so no one will ever lose theirs (hopefully).

Then we went to the party that went from 10:00pm to 1:00am at a sports club which is super late but seriously wasn't even a tad fuzzin tired. When we got there, Ev, Sea, Christi and I started playing tennis  but Christi and Sea gave up on it after a while so we went somewhere else. The somewhere else was a walli-ball court which we played with a few other people but then Sea, Ev, and the other people left so Christi and I played by ourselves until her parents (they were chaperones) came to challenge us :P It was really funny but no joke, we lost 4-15.... It was rigged..... Christi and then went to dangle our feel in the pool and seriously, time was up after that. It went so fast and I couldn't believe it was over!
There were raffles there and I won a $15 itunes gift card which I don't know what to do with but you know.... I'll find something :P

Ok so I guess y'all wanna see my dress? 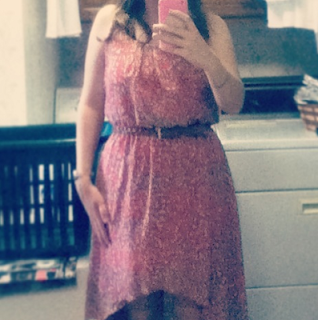 Sorry that's a really bad picture but it's actually a high-low dress and there are little flowers all over it. I paired it with a brown belt too for added effect :) I used my diamond ring and my diamond and pearl studded bracelet as accessories. The finishing touch was my silver locket which is really special to me ;) 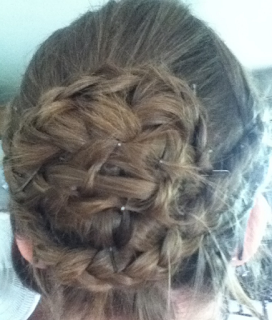 This was my hair :) This picture does it no justice but it was really pretty in real life. Honestly it took the girl like 15 minutes to whip the whole thing up and I think it turned out great!

Wednesday is our last day of school and we can go home whenever we finish presenting our final project and if we get a B- or better. I'm pretty sure I'll be ok but there's always a chance I'm doing everything completely wrong......
Anyway, I gotta get going for tonight so talk to you all later!
July
Email Post
Labels: banquet dresses