Hello! This is July! Sorry I haven't been posting regularly lately because of exams, and other stuff I've been busy with. Sadly, this could be my last post of the school year which means that I have to give my laptop back on Tuesday and probably will only be able to post once a week on a friends computer during the summer because my home computer doesn't do blogger *mad face*. Oh, and I won't be able to do pics either. But believe me, I'll be taking tons of my family's vacation to Colorado in July (the month lol) and other stuff I'm doing this summer. Here is just a few things I have planned:


Fun huh? And that doesn't even include hanging out with friends or playing video games! Yes, I am a gamer, but only for about two hours in the morning while I am waking up and have nothing else to do.
What fun things do you have planned for your summer? Nobody's will be as good as mine ;) Just kidding, everybody probably has a whole bunch funner stuff than I do planned. Now that I've bored you to death with my summer plans, lets get to the point of the post.

So last week Sea and I were standing around waiting for our band to line up and a congressman who lives close to our town and who's two sons are in our band came over and game Sea a high five and was like, "Go get 'um!"
And Sea was like, "Um, right!"
It was really funny, Sea was so embarrassed. 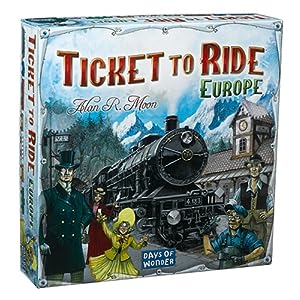 Yesterday, my dad heard this advertisement on the radio about a game night with some radio hosts at a local game store and there was a Ticket to Ride (which is a super fun game) challenge and there were prizes. He told me and my brother because every time we go to Pennsylvania to visit my aunt and uncle, us kids and my aunt and uncle have a night dedicated to Ticket to Ride! So we decided to go and Christopher and Amelia were there from the radio. Oh, and one of our substitute teachers Mrs. VanderBurgy.... who said hi to me. So we started the Ticket to Ride challenge with two tables and the top two from each table move on. At my table were Amelia, Mrs. Vanderburgy, and my brother. We played and talked and at the end when we counted up points, my brother came in first (of course), and I just snagged second by two points! In third was Mrs. Vanderburgy, which left last to Amelia.

At the other table, where they hadn't finished yet, Christopher was bragging that he had never lost a Ticket to Ride challenge and that he would be moving on.... but guess what? Some guy named Melvin and a lady name Sayre (I think that's how you spell it, she said her name was like Sare but that doesn't look like the right spelling) one and moved on instead! So Melvin, Sayre, my brother and I all advanced to the winners table to compete for CD's. There were six CD's total : first place got three, second place got two, third place got one, and fourth place got zero. We played and my brother got first and picked a Sidewalk Prophet CD, a David Crowder Band CD and a Brit Nicole CD. Melvin came in second and he gave one CD to me because I came in last. How nice of him! So I came out with Passion: White Flag. Sayre got something else, I didn't know who they were so I don't remember the name.
After that we played a game called King of Tokyo with Christopher and Amelia and I actually won! Yay! I never win games! The game King of Tokyo looks stupid, but it's really fun! Sadly they don't make that game anymore. So if you ever have a chance to play it, try it no matter how stupid it looks.
As we were leaving, Mrs. VanderBurgy was leaving too and she said in all seriousness, "Now you can go back to school and tell all your friends that you beat Mrs. Vanderburgy at two games!"
And I was like, "Right, yeah... hahaha..." Inside I was saying, "Yeah right."
So we won four CD's! Not a bad haul if I do say so myself!

So since this will probably be my last post with my laptop, I am going to try to do a "Summer Diaries" thing where I will post once a week with a little snippet about every day of the week. I'll see what I can do though! I'll try to post more often if I can. I'll keep you posted on what I will do. Thanks for being such faithful followers and please bear with me if I can't always post during the summer. As for the "What I am currently reading" widget, I will take that off since I cannot do pictures and I won't be able to keep up anyway because in the summer I read close to 2-3 books per day. Also, I would love the sentence story finished by tomorrow night but I understand if we can't wrap it all up by tomorrow it will have to stay unfinished for now... I can try to finish it too, but I will be swamped with studying for the final exam on Tuesday. I would love to hear from you about this post, or about anything for that matter, before my laptop and I separated for the summer. Thanks!
Love you all (as friends! Don't think bad thoughts!),
July A. Emmance
Email Post